We here at Gunprime just posted an article about how much we love the 12 Gauge shotgun for home defense, and for good reason. Nothing else on the market offers the kind of versatility that a shotgun provides, and with its almost endless choice of ammunition there’s a shell for everything from bird hunting to grizzly bears. In that story we talked about three great budget shotguns, and we still think those are a great option. However, that doesn’t mean there’s nowhere to go up from there. There’s plenty of room to upgrade, and two great choices for premium tactical semi-automatics are the FN SLP and the Beretta 1301 Tactical.

Beretta has been around longer than, well, just about everything. Founded in 1526, Beretta has been equipping the armies of Europe for just about longer than those Europeans have been in North America. It’s safe to say, then, that Beretta knows how to make a gun, and the 1301 is no exception. A relative of Beretta’s extensive lines of sporting shotguns, the 1301 is a lightweight and extremely comfortable shotgun. The genetic relationship to Beretta’s sporting guns doesn’t end at the internals either - just like on their other models, the stock is adjustable for length of pull, drop, and cast. While this level of customizability is great for anybody, it’s especially nice for people who already have another Beretta shotgun and can customize their 1301 just like the shotgun they already know and love. Beretta tops off this great package with perhaps their best feature of all, a very reasonable price.

Enter the Belgians: the FN SLP 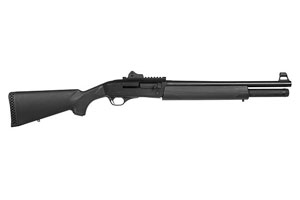 While FN may not have been around for quite as long as Beretta, they’re no slouches in the heritage front either, having collaborated with none other than John Moses Browning for many of his most celebrated designs. However, while FN has become one of the most storied names in rifles and pistols, FN has never really been known for their shotguns. That doesn’t mean the SLP should be overlooked, however, because this shotgun absolutely shows off the same quality that we’ve come to expect from everything else FN. It’s a little heavier than the Beretta, but it feels heavier in a good way. It’s well built, with a nice thick receiver and an ultra-solid optics rail. Basically, this thing feels like it’s made it of granite, and you could probably use it like a sledgehammer too. Once again, the SLP is a terrific value, just barely above the Beretta.

It’s tough to say between these two. Both are well built and well refined, and both would be a stellar choice for home defense. The Beretta feels a little lighter and snappier, and its controls are a lot like other Beretta shotguns, so it might be the better choice for someone who already has experience with hunting shotguns, or who might want a lighter shotgun use as a double duty hunting or general outdoorsman gun. On the other hand, the SLP is definitely the more tacti-cool of the two, and feels a little more robust. It can also be ordered with a competition style barrel, and with its heavier weight would make for a very comfortable sport shooting gun. Either way, these two shotguns are great choices, and for those of us looking for an upgrade to the shotguns we already have these are great options.