Home > Blog > Why Use a Mossberg for Home Defense?

Why Use a Mossberg for Home Defense?

First of all, the Mossberg name has a lot of history and tradition behind it. O.F. Mossberg & Sons is an American company that continues to manufacture products in the U.S. Mossberg has been making long-barrel firearms for more than a century, since they introduced their first rifle in 1921. While Mossberg made its name during its first 25 years with the Brownie pistol and HI line of 22-caliber rifles, after World War II the company concentrated on making versatile shotguns for the entry-level sportsman, mostly bolt-action at first, but increasingly pump-action shotguns the increasingly became favorites for home defense weapons. 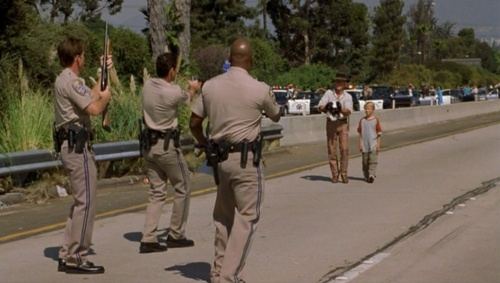 The 500 Series has a wide selection of hammerless repeating shotguns that share the same basic receiver and action, but have different bore sizes, choke options, barrel lengths, stock and forend materials, and magazine capacities. All Series 500 models with matching capacities have interchangeable barrels.

One reason the Mossberg 500 Series is popular as a home defense weapon is because it’s easy to use and maintain. The 500 Series was designed for harsh conditions, whether waterfowl hunting or combat, so it’s easy to clean and maintain. The barrel can be removed without tools, and the ample clearance between the steel action bars and their receiver channels allows the weapon to continue to function despite the presence of dirt or debris, and it reduces long-term wear.

The Mossberg 500 is also a popular home defense shotgun because there is practically a model or variation for nearly every need. The 500 Series models are generally classified into two broad categories, field models and special purpose models. (Although marketed under different brand names, the Revelation 310 and New Haven 600 are variations of Mossberg home defense shotguns.)

Mossberg 500 field models are the basic sporting models in the series, primarily designed for hunting waterfowl, turkey and upland game, available with a variety of barrel lengths and finishes. The special purpose models are designed for self-defense, and for police and military use, and have shorter barrels and larger capacities. In addition, the Mossberg 500 Series has ultra-durable “law enforcement” models with heavy-duty barrels, metal trigger guards and metal safeties.

The 500 Series includes a number of different receiver configurations, differentiated by their magazine configurations. The standard Model 500 is known as the “six shot” model, holding five 2.75-inch shells (70mm) plus one in the chamber. The Model 590A1 is available from the standard 5-plus-1 capacity, up to 8-plus-1. 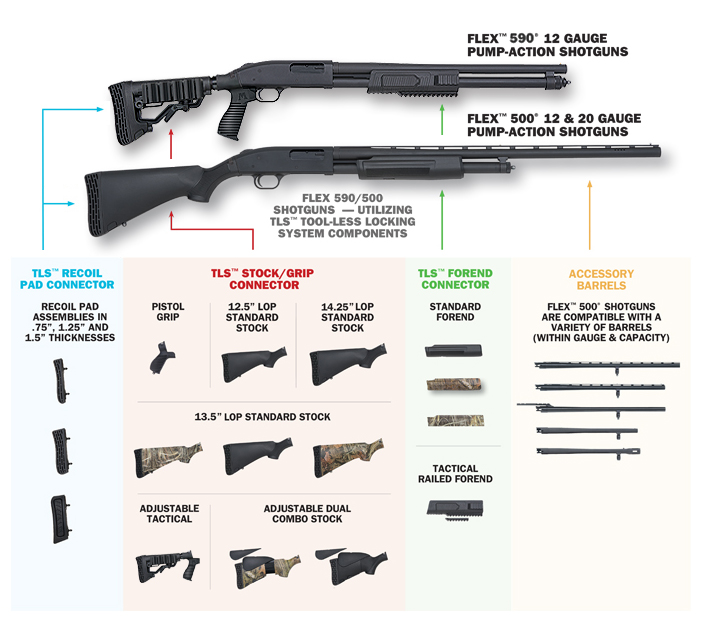 Both the Model 500 and Model 590 have standard barrels and polymer trigger guards and safeties. The Model 590A1 was designed for military use, for harsh conditions and rough treatment, so it has an aluminum trigger guard and safety, as well as a heavier barrel and a bayonet lug. The 590A1 is available with 14-inch, 18.5-inch and 20-inch barrels. While the 590A1 is generally sold through military and law enforcement channels, GunPrime usually has a number of these high-performance weapons available for sale. The Mossberg 590-SB is actually a Model 590A1, since it has the same military trigger group and heavier barrel, but it is sold exclusively to the civilian market.

Another reason the company is almost synonymous with home security is its specific Mossberg “home security” model, the Series 500 HS410, a .410-gauge specifically designed for defensive use by a novice shooter who needs a dependable, effective, easy-to-use defensive weapon.

The Mossberg 500 series also includes smaller Bantam and Super Bantam models that have shorter length of pull, as well as the scaled-down Model 505 Youth model, which has a 12-inch buttstock. The Model 535, however, is one of the 500 Series’ bigger models, with a lengthened receiver that can fire 3.5-inch (89mm) shells.

One of Mossberg’s newest home defense weapons is the Model 590 Shockwave, a lightweight (5.25 pounds), compact (a little over 26 inches long), pump-action firearm that fires shotgun shells but doesn’t technically meet the definition of shotgun, but also does not fall under the legal restrictions that apply to “short-barrel” shotguns. The 590 Shockwave is available in 12-gauge, 20-gauge and .410-bore, all with its recoil-resistant “Raptor” birds-head-design pistol grip.